A plane curve whose equation in polar coordinates has the form

For general $m>0$ the sinusoidal spiral passes through the pole, and is entirely contained within a circle of radius $a$. When $m$ is negative, the radius vector of the curve can take arbitrarily large values and the curve does not pass through the pole. The sinusoidal spiral is symmetric with respect to the polar axis, and when $m=p/q$ is rational (where $p$ and $q$ are relatively prime numbers), it has $p$ axes of symmetry passing through the pole. When $m$ is a positive integer, the radius vector of the curve is a periodic function of period $2\pi/m$. As $\phi$ goes from 0 to $2\pi$, the curve consists of $m$ branches, each contained in an angle of $\pi/m$. In this case the pole is a multiple point (see Fig.). When $m=p/q$ is a positive rational number, the curve consists of $p$ intersecting branches. When $m$ is a negative integer, the curve consists of $|m|$ infinite branches, which can be obtained by inverting the spiral with $m'=-m$. 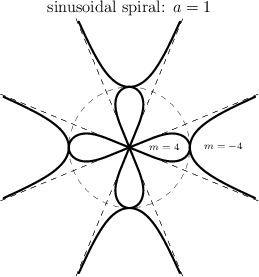 How to Cite This Entry:
Sinusoidal spiral. Encyclopedia of Mathematics. URL: http://encyclopediaofmath.org/index.php?title=Sinusoidal_spiral&oldid=42493
This article was adapted from an original article by D.D. Sokolov (originator), which appeared in Encyclopedia of Mathematics - ISBN 1402006098. See original article
Retrieved from "https://encyclopediaofmath.org/index.php?title=Sinusoidal_spiral&oldid=42493"
Category: