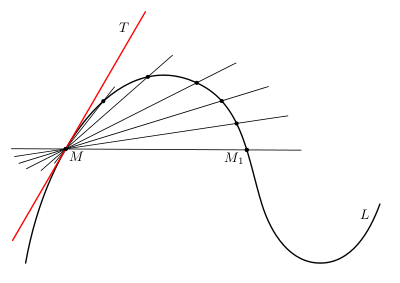 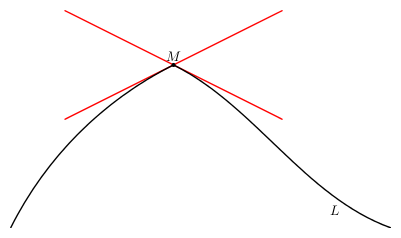 Not every continuous curve has a tangent, since $MM_1$ need not tend to a limiting position at all, or it may tend to two distinct limiting positions as $M_1$ tends to $M$ from different sides of $L$ (Fig. 2).

By a tangent to a surface $S$ at a point $M$ one means a straight line passing through $M$ and lying in the tangent plane to $S$ at $M$.

How to Cite This Entry:
Tangent line. Encyclopedia of Mathematics. URL: http://encyclopediaofmath.org/index.php?title=Tangent_line&oldid=25324
This article was adapted from an original article by BSE-3 (originator), which appeared in Encyclopedia of Mathematics - ISBN 1402006098. See original article
Retrieved from "https://encyclopediaofmath.org/index.php?title=Tangent_line&oldid=25324"
Categories: