Warning: unlink(/var/www/html/images/tmp/f4be0a4b5fadf4e7bdf7a5bbc9d22452.asy): No such file or directory in /var/www/html/extensions/Asymptote.php on line 109

Warning: unlink(/var/www/html/images/tmp/ltx-f4be0a4b5fadf4e7bdf7a5bbc9d22452.aux): No such file or directory in /var/www/html/extensions/Asymptote.php on line 113

Warning: unlink(/var/www/html/images/tmp/ltx-f4be0a4b5fadf4e7bdf7a5bbc9d22452.log): No such file or directory in /var/www/html/extensions/Asymptote.php on line 114

Warning: unlink(/var/www/html/images/tmp/f4be0a4b5fadf4e7bdf7a5bbc9d22452.eps): No such file or directory in /var/www/html/extensions/Asymptote.php on line 115

Warning: unlink(/var/www/html/images/tmp/f4be0a4b5fadf4e7bdf7a5bbc9d22452.log): No such file or directory in /var/www/html/extensions/Asymptote.php on line 116

Warning: unlink(/var/www/html/images/tmp/47ccf3fd7e05db3835f854e32f5ca8fc.log): No such file or directory in /var/www/html/extensions/Asymptote.php on line 116
 Non-precise data - Encyclopedia of Mathematics

Real data obtained from measurement processes are not precise numbers or vectors but are more or less non-precise. This uncertainty is different from measurement errors and has to be described formally in order to obtain realistic results by mathematical models.

A real-life example is the water level of a river at a fixed time. It is typically not a precise multiple of the scale unit for height measurements. This water level is a fuzzy quantity called non-precise. In the past this kind of uncertainty was neglected in describing such data. The reason for that is the idea of the existence of a "true" water level which is identified with a real number times the measurement unit. But this is not realistic. The formal description of such non-precise water levels can be given using the intensity of the wetness of the gauge to obtain the so-called characterizing functions (see below).

are considered to be numbers, i.e.

denotes the error of the

Historically, non-precise data were not studied sufficiently. Some earlier work was done in interval arithmetic. In general, non-precise sets in the form of fuzzy sets were considered by L.A. Zadeh. Some publications combining fuzzy imprecision and stochastic uncertainty came up in the 1980s, see [a2]. Some of these approaches are more theoretically oriented. An applicable approach for statistical analysis of non-precise data is given in [a4].

In the case of measurements of one-dimensional quantities, non-precise observations can be reasonably described by so-called fuzzy numbers

. Fuzzy numbers are generalizations of real numbers in the following sense.

is characterized by its indicator function

. Specializing the membership functions from fuzzy set theory, a fuzzy number is characterized by its so-called characterizing function

, which is a generalization of an indicator function. A characterizing function is a real-valued function of a real variable obeying the following:

is a closed finite interval. Characterizing functions describe the imprecision of a single observation. They should not be confused with probability densities, which describe the stochastic variation of a random quantity

A fundamental problem is how to obtain the characterizing function of a non-precise observation. This depends on the area of application. An example is as follows.

as an increasing function of one real variable

can be used to obtain the characterizing function

in the following way. Take the derivative

and divide it by its maximum. The resulting function, or its convex hull, can be used as characterizing function of the non-precise observation.

In Fig.a2 the construction of the characterizing function from a gray intensity is explained.

in order to estimate the distribution of

. Facing this kind of samples, even a most simple concept like the histogram has to be modified. This is necessary because, for a given class

in a histogram, for a non-precise observation

, it is not possible to decide whether or not

is an element of

. The situation is explained in Fig.a3.

A generalization of the concept of histogram is possible by defining so-called fuzzy histograms. For such histograms the height of the histogram over a fixed class

is a fuzzy number

. For the definition of the characterizing function of

, see [a3]. For other concepts of statistics in the case of non-precise data, see [a4].

In the case of multi-variate data

, for example the position of an object on a radar screen, the observations are non-precise vectors

. Such non-precise vectors are characterized by so-called vector-characterizing functions

are real-valued functions of

is a closed and star-shaped subset with finite

For the generalization of functions of real variables, the so-called extension principle from fuzzy set theory is used. This principle generalizes a function to the situation when the value of the argument variable is non-precise.

be a classical real-valued function of

variables. If the argument

is precise, then the value

of the function is also a precise real number. For a non-precise argument

it is natural that the value

becomes non-precise also. The quantitative description of this imprecision is done by using the characterizing function

be the vector-characterizing function of the fuzzy vector

. Then, for all real numbers

, are given by the extension principle in the following way:

it can be proved that

is a characterizing function, see [a4].

Consider the monitoring of quantities in continuous time for real measurements. The results are functions of time with non-precise values. Therefore the concept of a non-precise function is necessary. These are functions whose values are fuzzy numbers. Let

be the domain of the non-precise function

be the set of all fuzzy numbers; then

of the fuzzy numbers

are called lower and upper

and depicting the corresponding

-level curves in a diagram, a good graphical display of the non-precise function is obtained. An example is given in Fig.a4. 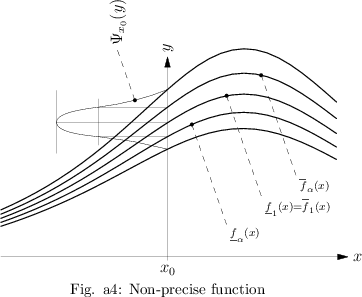 Whenever measurements have to be modeled, non-precise numbers appear. This occurs in the initial conditions for differential equations, in the time-dependent description of quantities, as well as in statistical inference.

Mathematical methods for the analysis of non-precise data exist and should be used in order to obtain more realistic results from mathematical modeling.

How to Cite This Entry:
Non-precise data. Encyclopedia of Mathematics. URL: http://encyclopediaofmath.org/index.php?title=Non-precise_data&oldid=35612
This article was adapted from an original article by Reinhard Viertl (originator), which appeared in Encyclopedia of Mathematics - ISBN 1402006098. See original article
Retrieved from "https://encyclopediaofmath.org/index.php?title=Non-precise_data&oldid=35612"